Big Beyond Belief:
The Most Effective Muscle Building Program Ever! 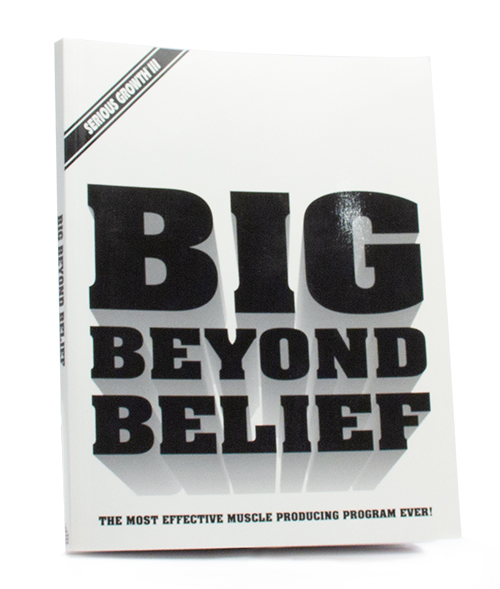 A bold title? Yes, but ask anyone who has "honestly" used this program as described and they won't disagree. Fact is, most people aren't willing to work hard enough to get the results they want. That's their fault not the programs.

When we told people through our advertising that they would build twice as much muscle in half the time, many equated that to "this is easy".

It's not easy. And I never said it was easy.

Big Beyond Belief leverages your time in the gym to the absolute max, but you still gotta do the work. So if you are willing to do the work, this program will not disappoint.

Praise for Big Beyond Belief:

"This is an excellent training program and its concept is sound. For the person or athlete who is serious about his or her training, this course will pay big dividends."
-- Bill Pearl, Former Mr. America and Mr. USA, and four-time Mr. Universe

My most productive years in the NFL...

"After seven years in the NFL, it was crucial I find a strength and conditioning program that would give me an edge on the younger players. After researching many of the best program, I can say with confidence that the Big Beyond Belief program is the only one that combines scientific data with old fashioned common sense. This program gave me results I thought unachievable, along with my most productive years in the NFL."
-- Michael Young, Denver Broncos

Gain a tremendous amount of growth...

"Over the years, I've seen a number of companies come and go, making wild claims about their programs. When tried, they produce more frustration than muscle. If you follow the Big Beyond Belief program to a 'T', you will gain a tremendous amount of growth."
-- Vince Gironda, "Iron Guru" Original trainer of Arnold, Lou "The Hulk" Ferrigno, Franco Columbo & countless other stars

I've left everyone so far behind...

"Thanks. At first, people talked a lot of crap about my new training. But in the last 8 months I've left everyone so far behind that they just ask questions and watch."
-- Dana Mattos, Honaunau, HI